Snow Total - Forecasted by Models as of 06Z 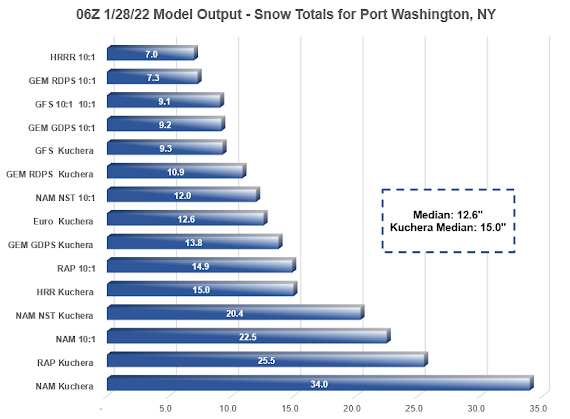 Posted by Matthew Alevy at 6:04 AM No comments:

We are now watching a forecast for an historic blizzard. Parts of the northeast may see over 3 FT of snow tomorrow and there will be a general 1-2FT accumulations across an area that covers nearly 100 million people. The output below is from the NAM model but most model guidance is now consistent. Now that we are within 24-36 hours, the NAM and higher resolution short range models like the HRRR will give us more accurate predictions.

A southern branch disturbance over the four corners moves into Texas on Friday am, dives south and combines with a northern branch piece of energy coming down from Minnesota. The two phase (merge) over the southeast to form one large trough that tracks off the east coast, strengthens significantly as it moves off the east coast Sat AM, moving up the Eastern seaboard and closes off near eastern long island.

From 15Z Sat (10AM) to 00Z Sun (7PM) the low deepens and strengthens significantly as it slowly tracks from off the NJ coast off of cape cod. The slow upper air dynamics will be important.

These mid level dynamics result in a strong surface low forming off the SC coast around 21Z Friday (4PM) and moving up the coast. By 09Z Sat (4AM), the 990 mb low is just off the Delmarva with a large precipitation shield around it stretching from the Carolinas all the way up to Maine.

At 18Z Sat the low has strengthened to 960 mb - the equivalent of a strong Cat 2 hurricane - and the surface low has only moved to S NJ so NYC is experiencing heavy snow for at least 9 hours.

Because of the cold temperatures in place before, during and after the storm, snow : liquid ratios above 15 : 1 are highly possible. The Kuchera model may be a bit overdone but if it verified would deliver a wide area of 1-2FT accumulations (pink/purple) from Delaware up to Maine including NYC and a band of 3FT+ accumulations from coastal NJ through NYC up through nearly the entire states of CT, MA and NH. This would be the most impactful and heaviest blizzard in the history of the Northeast. I am predicting 18" for Central Park, 3FT for Eastern LI and CT and 12" for many parts of NJ.

All week there was a debate in the weather community as to whether "the king" Euro model or the American (GFS) would "cave." Run after run the Euro signaled a more westerly track right over the "benchmark" that would deliver a huge snowstorm for Boston and a glancing blow for NYC with a solid 6-12". Well last night we found out that the Euro was right. Not only has the GFS (and all other major models) caved to more of a Euro solution, everything shifted 25-50 miles west which makes a huge difference.
Posted by Matthew Alevy at 5:46 AM No comments: 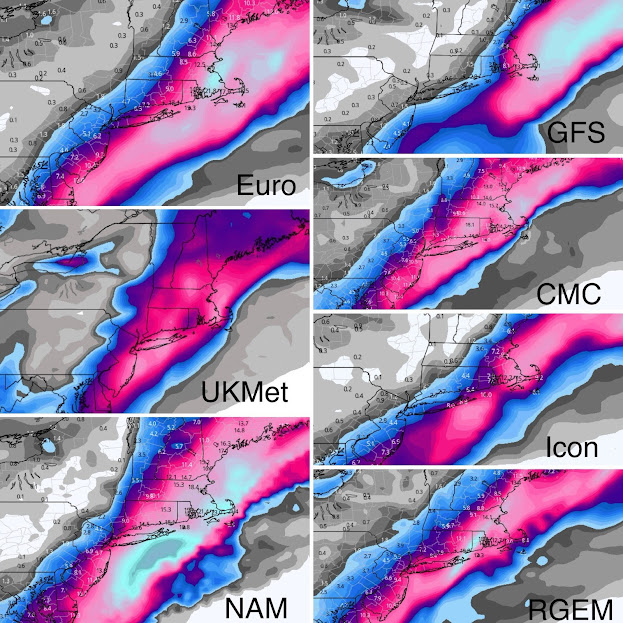 Posted by Matthew Alevy at 7:30 AM No comments:

It's clear that a very strong storm will track up from the Carolinas somewhere off the eastern seaboard on Friday night into Saturday. It's also clear that parts of the northeast, especially coastal New England will feel the effects and heavy snow is likely. Beyond that, it's pretty much a crap shoot. Here is the latest modelology on this storm:

The best way to summarize this is there is a model battle between the GFS (American Global Forecasting System) and the rest of the models from around the world. The GFS takes this storm too far out to sea for NYC to really get snow (1-3") and the rest of the models (Euro, Canadian, UK, German, etc.) show a much more westerly track that could bring 12"+ (actually 18-24") to the NY Metro area. Many forecasters will choose a solution in the middle but I think it's important to note that the solution doesn't have to be somewhere in between. It could even be west of the Euro or east of the GFS...

The 06Z NAM which is less reliable than the 00Z brought the storm far West which is good if you are rooting for snow in NYC. Most people discount the NAM past 48 hrs though so wouldn't put too much stock in the 18-24" snow totals in NYC and W LI at this point... 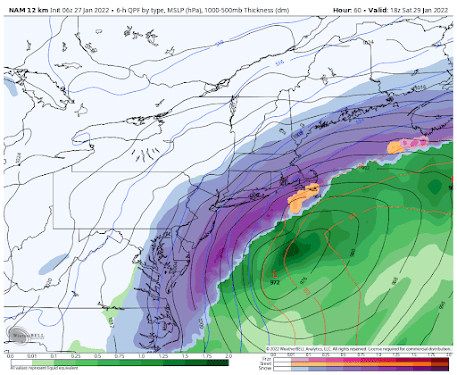 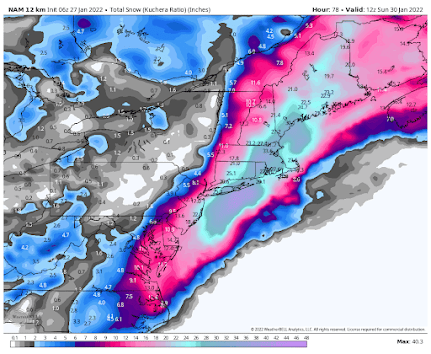 I don't show the Euro but it continues to show a far west solution and absolutely clobbers NYC and LI with Snow. This is the most bullish model and it has been surprisingly consistent.

The RGEM also ticked West overnight in line with the Euro. 12-18" in NYC 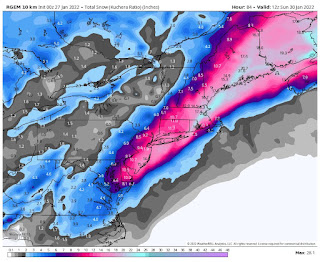 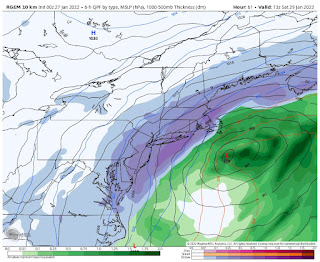 The less followed ICON (German) also has a Westerly solution: 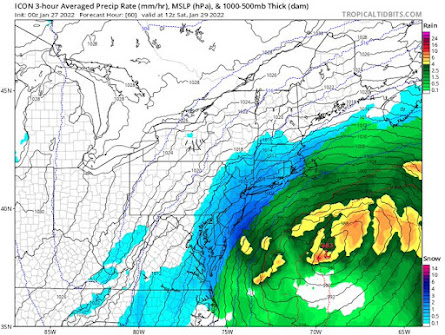 Also not shown the UKMET and Canadian have western tracks and very favorable for snow. So in summary unless you think the GFS really knows something t hat all of the other models don't I think a 6-12" snowfall is quite likely.
Posted by Matthew Alevy at 6:04 AM No comments:

Here is the latest on the snow threat for next weekend:

Posted by Matthew Alevy at 10:12 AM No comments: